“Archaeologists Train “Monuments Men” to Save Syria’s Past”

by Andrew Curry via “National Geographic“

Amid the devastation and danger of civil war, Syrian archaeologists and activists are risking their lives in the battle against looting. . . .

The ancient city of Dura-Europos sits on a bluff above the Tigris River a few miles from Syria’s border with Iraq, its mud-brick walls facing a bleak expanse of desert. Just a year ago the city’s precise grid of streets—laid down by Greek and Roman residents 2,000 years ago—was largely intact. Temples, houses, and a substantial Roman outpost were preserved for centuries by the desert sands.

“It stood out for its remarkable preservation,” saysSimon James, an archaeologist at the U.K.’s University of Leicester who spent years studying the site’s Roman garrison. “Until now.” (See before and after pictures of archaeological site looting.)

Satellite images of the site released by the U.S. State Department in June show a shocking picture of devastation. In the past year, as fighting continued to rage between the government of President Bashar al Assad’s troops and rebels—including the Islamic State in Iraq and Syria—the site has been ravaged by industrial-scale looting.

Aleppo’s Umayyad Mosque is seen here in 2009, before being damaged in the civil unrest.
PHOTOGRAPH BY BRYAN DENTON, CORBIS

“It’s a lunar landscape of spoil heaps,” says James. “Obviously, the looters were bankrolled to a massive extent to do something like this.”

It may be too late to save Dura-Europos, but archaeologists and activists are scrambling to preserve what’s left of Syria’s rich history, which stretches back more than 10,000 years. The efforts are focused on training locals to save ancient monuments and museum collections in the midst of a war zone.

Organizations including the University of Pennsylvania’s Cultural Heritage Center, the International Council on Monuments and Sites (ICOMOS), and Heritage for Peace, a network of volunteers and activists based in Spain, have been holding workshops to train Syrian archaeologists, curators, and activists in “first aid for objects and sites,” says Emma Cunliffe, a consultant specializing in heritage protection during conflicts.  . . .”

“Paintings looted by Nazi, recovered by Allies to be auctioned in NY”

by Patricia Reaney via “Yahoo News“

“NEW YORK (Reuters) – Paintings looted by the Nazis during World War Two and retrieved by the Monuments Men, the Allied group tasked with returning masterpieces to their rightful owners, will be sold at auction on Thursday in New York.

The works, which will go under the hammer during Sotheby’s sale of Important Old Master Paintings and Sculpture, were among the tens of thousands of works recovered by the art experts whose story is told in the George Clooney film “The Monuments Men,” which opens in U.S. theaters on February 7.

“In France, for example, 36,000 paintings were stolen from institutions and largely from individuals. The Monuments Men managed to recover and return the majority of those,” he said in an interview.

by Deborah Vankin via “LA Times“ 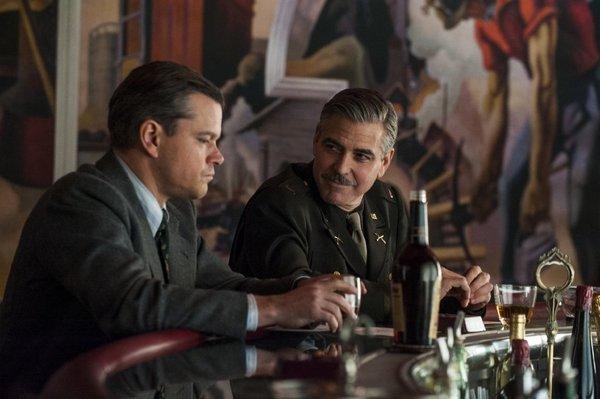 “The Berlin Film Festival announced Friday that “The Monuments Men,” George Clooney’s upcoming World War II movie about the search for and recovery of Nazi-looted art, has been added to its lineup. The announcement comes shortly after the revelation that more than 1,400 artworks – by Picasso, Renoir, Toulouse-Lautrec and others — were found in a Munich, Germany, apartment and are believed to include looted items as well as art the Nazis called “degenerate” that was removed from German museums. “

Kind of curious to see if the film is anything like the real history. The work that the real Monuments Men did was amazing enough, it hardly needs embellished.  Wonder what the reception in Germany will be like considering the recent Munich Art Discovery.