“In a Field” by Aaron Robbins via Saatchi Art 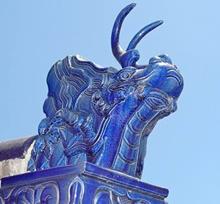 By Susanna Kim via “ABC News”

“Letters found in a Corn Flakes cereal box reveal intimate relationships between German prisoners of war and the Tennessee locals who lived and worked among them. Curtis Peters of Tennessee said his sister-in-law in Lawrenceburg, Tennessee, found some 400 letters in the home of her great-aunt when she passed away in the late 1980s. The letters, written by German men who lived in a prison camp near Tennessee’s southern border after World War II, are “social history, about their lives, their families, the hardships they suffered,” said historian Tim Johnson. . .”

By Chris Carle via “IGN”

“Each year, Anime Expo proves to be one of the marquee destinations for cosplay in the US, and 2015 is no exception. AX attendees showed once again that they are some of the most skilled and dedicated cosplayers around.

With diverse cosplay from anime, video games, movies and TV shows, AX 2015 had a little something for everyone. In addition to anime cosplay galore, we saw Sly Cooper, Solid Snake, a Big Sister, Harley Quinn, Yoshimitsu, Servbot, a handful of War Boys, groups of roaming Borderlands vault hunters… even a guy dressed as the wireframe Little Mac from the arcade Punchout. . . .”

“Noah Bradley is a 26-year-old artist finally surpassing the 10,000 hours mark for working his craft to perfection. Over the weekend his collection of drawings showing his progress from a 14-year-old with a dream to a master artist went viral, which as Bradley told The Huffington Post, has led to many aspiring artists reaching out to him about their own paths to “pursuing art.”
“Learning that my story served as some amount of inspiration for people to pick up a pencil just warms my heart,” Bradley told HuffPost. “I couldn’t be happier.”
Bradley transitioned from someone who wanted to be an artist to someone who fulfilled his dream.. . .”

“An Introduction to the Booming World of Latin American Digital Arts“

By Thea Pitman via “The Conversation” “The idea of “digital arts” may not immediately call Latin America to mind. Silicon Valley maybe, Old Street roundabout maybe; probably not Buenos Aires. But this is exactly where the most recent E-Poetry Festival, “renowned biennial international artistic gathering”, took place earlier this month. I attended, and the gallery space on the opening night was positively buzzing with internet artists, digital performance artists and sound, video and code poets.
This is the first time the festival has been held in Latin America in its 14-year history – previous events have been held in. . .”

By Chesney Hearst via “The Rio Times”

““Eva – O corpo feminino como tabu e ponte para a transgressão” (Eva – The female body as taboo and bridge for transgression), an exhibition of the works of Rio de Janeiro street artist and women’s rights activist Panmela Castro opened on July 8th in Galeria Scenarium and will continue through August 19th. The free to the public exhibition features over seventy works by Castro that explore the archetype of Eve, gender, and the female body. Curated by Priscilla Duarte, the displayed works include twenty paintings, twenty-two drawings, fifteen watercolors, three sculptures, fifteen photos and a video installation, created through a collaboration with Krank of the well-known Rio de Janeiro graffiti collective, FleshBeckCrew. . . .”

“Art for a cause: photo exhibit documents Chilean dictatorship”

By Jeremiah Rodriguez via “The Hamilton Spectator”

“A powerful set of photos and artwork will serve as stark reminders of Chile’s 17 years of violence at the hands of a brutal dictatorship.
The Pearl Company is hosting an art exhibit July 3 to 5 that chronicles the human rights violations under Augusto Pinochet from 1973 to 1990.
The official opening with music Friday night will feature guest speaker and human rights activist Carmen Gloria Quintana, who survived the Chilean military’s attempt to burn her alive in 1986.
In an email, translated from Spanish, she wrote why she is speaking at this exhibit. . . .”

By On the Coast via “CBC News”

“Most Canadians would remember seeing them in schools, libraries, and banks — prints of paintings that featured Canadian landscapes and alpine lakes made famous by the likes of Emily Carr and members of the Group of Seven.
In fact, the public art installations were part of the Sampson-Matthews silkscreen project, one of the largest art programs in Canada’s history.
The project, which was spearheaded by Group of Seven painter A.Y. Jackson, began as wartime propaganda during the Second World War.The Toronto graphic-arts company Sampson-Matthews Ltd. produced tens of thousands of prints that got installed in barracks in Allied countries. Afterwards, the images were made popular in Canadian schools, libraries, public offices and banks. . . .”

“Mexican designers emerge from the shadow of the US”

By Alex Gorton via “FT.Com”

“With its proximity to the US, fragmented infrastructure and cultural insecurity, Mexico’s design industry has long been overshadowed by its dominant northern neighbour. And yet, with increased economic growth, an emerging pride in its own skills and talent and a desire to look as much to the east and west as it does to the north, Mexico is an increasingly interesting player in global design.
By tapping into the country’s rich cultural heritage, artistic traditions and craft-based skills, Mexican designers are carving out their own niche by taking elements of traditional culture and updating them with a contemporary, global aesthetic.
“We are in a process of defining what Mexican design really is,” says Héctor Esrawe, one of the country’s leading designers. “It is not a consolidated movement and we have a lot to work on.”. . . .”

by Eleanor Burns via “CBR“

The EMC Heritage Trust Project helps conservation of information heritage through digitisation around the world.

The grants will support projects that practice and encourage the stewardship of cultural information in local communities in the UK, Canada and India.

The grant recipients include The Royal Institution, who will use the grant to digitise all Christmas Lecture recordings from 1966 on, making them available to audiences around the world.

The Nikkei National Museum in Canada will now be able to make the collection available to researchers around the world, through digitisation. Through its EMC Heritage Trust Grant, the Museum plans to add 2,000-4,000 new items to its online database. . . .

by Carlito Pablo via “Georgia Straight“

THIS YEAR’S KOREAN Cultural Heritage Festival will have a modern feel.

According to festival spokesperson Mike Suk, it’s going to be vibrant and cutting-edge, reflecting South Korea’s status as a major global tastemaker, from cars to smart phones to pop culture. The festival’s theme is Dynamics of a Modern Korea.

“We want to show people the new Korea,” Suk told the Georgia Straight in a phone interview.

According to Suk, Hyundai will roll out its latest cars at Swangard Stadium in Burnaby’s Central Park, the venue for the 13th annual festival organized by the Korean Cultural Heritage Society.

He added that for the first time, huge TV screens will be set up to play Korean pop-music (K-pop) videos and commercials throughout Saturday (August 16). On-stage, local performers will sing and dance to K-pop songs.

“The energy is going to feel different,” Suk said. “It is important to note, this festival is not exclusive to the Korean community but rather a true celebration of a multicultural Canada”

Historically, the festival has been about traditional elements, and Suk said those will be present as well. A drum dance will open the festivities, followed by a reenactment of a traditional Korean royal wedding.

There will be a demonstration of the Korean martial art tae kwon do, and there will be tightrope-walking, or jultagi. A food pavilion will offer Korean food, beer, and wine, and traditional Korean souvenirs and gifts will be sold.

by Judson Berger via “Fox News“

The charge from Boujemaa Razgui, who is based in the U.S., has drawn widespread attention — in the U.S., in Canada, and particularly in the music community.  . . . “

The government disputes the claims, arguing that they merely destroyed random bamboo stalks, but that isn’t really the point. The real questioned the situation begs is when the Artist’s right goes too far.  Personally, I think that if the story proves true, the government officials were out of line.  However, what’s your opinion?  Given how far artist’s rights have been allowed to extend in the past, where should the line be drawn?  Art denigrating religious beliefs has been permitted.  Racist and fairly Vulgar works have been permitted. Is a minor potential threat to ecology more heinous? What’s your opinion?